Concrete floor installers began using the calcium chloride (CaCl) moisture test back in the early 1940s to conclude when a new concrete slab was fit for floor coverings. Over decades, CaCl gained industry acceptance as a practical standard. Although builders continue to use the CaCl moisture test, post-installation moisture problems eventually redefined it as a test method worthy of scrutiny.

The CaCl moisture test produced data based on moisture vapor emission rate (MVER), the quantitative indication of how many pounds of slab moisture evaporated from 1000 square feet of concrete over a 24-hour period. The applicable industry standard for this test, ASTM F1869, defined the scope of CaCl testing: “This test method covers the quantitative determination of the rate of moisture vapor emitted from below-grade, on-grade, and above-grade (suspended) bare concrete floors.”
Although F1869 states that CaCl does not address all concrete safety concerns, manufacturers and installers declared (with warranty) that an industry-standard MVER of three pounds satisfied ASTM F1869. At that point, it was safe to install floor covering over a concrete substrate.

Where the challenge became clear was in determining whether the surface emission rate determined by desiccant weight gain truly reflected the moisture conditions deeper in the slab.

If the quantitative assessment indicates moisture vapor emissions, building trades experienced decades of qualitative difficulties with the CaCl moisture test. In fact, moisture-plagued concrete slabs certified by ASTM F1869 protocol proved to be a patterned and persistent challenge to the concrete flooring industry – so much so that industry professionals began to investigate the scientific integrity of the CaCl moisture test.

Problem 1: surface measurement. CaCl measured only the top one-half to three-quarters inch of the slab.

Problem 3: scope of assessment. CaCl failed to methodologically account for the fact that concentrated concrete moisture resides at a greater depth than ever measured by the test. This led to continued moisture problems when that moisture eventually reached a covered concrete surface where they could no longer evaporate.

In light of such research, the American Society for Testing and Materials made two changes to moisture measurement industry standards. First, it amended ASTM F1869 to remove the CaCl moisture test as a means of measuring lightweight concrete moisture. Second, ASTM created F2170, a new standard that recognized in situ RH testing as an integral assessment method.

The CaCl moisture test is a building practice with lineage. It remains rooted in ASTM standard F1869 as the source of many tests tried. But their truth has entered a new era and the challenges of moisture emissions-based testing are becoming increasingly clear. 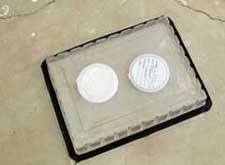